We talk to multicultural communities so we can understand the issues they face. Our reports share our findings.

Community engagement, research and consultation are central to the Victorian Multicultural Commission's functions.

We host roundtables and forums to gather ideas and insights from Victoria’s diverse communities.

We also do research to support the advice we provide to the Minister for Multicultural Affairs on the needs of Victoria's diverse communities. 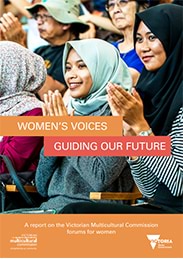 We contracted La Trobe University to produce an investigation into the anti-mosque and anti-Islam and anti-racism protests in Bendigo. The protests attracted international attention and highlighted national debates about safety, security, multiculturalism and Australian identity.

A Settlement Journey: Learnings from Canada and the USA Our Chairperson travelled to Canada and the United States to investigate international best-practice in refugee settlement programs. This report summarises the programs explored on this trip through discussions and observations with government officials, academics and members of the community into 7 themes.

The Victorian Multicultural Commission funded La Trobe University to examine the multicultural contexts of Shepparton and Mildura and measure the strength of social cohesion in these areas. The report found that: We hosted forums with community and health service providers and peak bodies during April and May 2015 to discuss:

Understanding and use of Power of Attorney in Victoria's CALD communities

The Department of Justice asked us to get feedback from multicultural communities on Powers of Attorney Legislation.

Engaging Our Youth: Our Future From December 2014 to June 2015 the Victorian Multicultural Commission conducted forums for young people at metropolitan and regional locations:

Participants people told us about the things that matter to them and shared their ideas about multiculturalism. Our findings have been used by the Victorian Office for Youth and not-for-profit organisations to inform policy and programs aimed at building the capacity of young people from culturally diverse backgrounds in Victoria. Download our guide to community consultation with diverse community members. Ensure your project gets a varied range of viewpoints to inform and improve formal decision making.