VMC Regional Advisory Council member, Betul Tuna is a force for good in her home town of Shepparton.

Regional Advisory Council member Betul Tuna is a 32 year-old Turkish-Australian and mother of three who has her heart in the area, and her soul in breaking down barriers. Among those barriers are some of the misconceptions about Muslims in Victoria - how they identify themselves and how they live life.

“I was born in Shepparton, raised there until I finished Year 12 and then I went overseas. Got married, had kids – and no, it wasn’t a forced marriage, it was by choice.”

“I call myself a Muslim bogan,” she said. 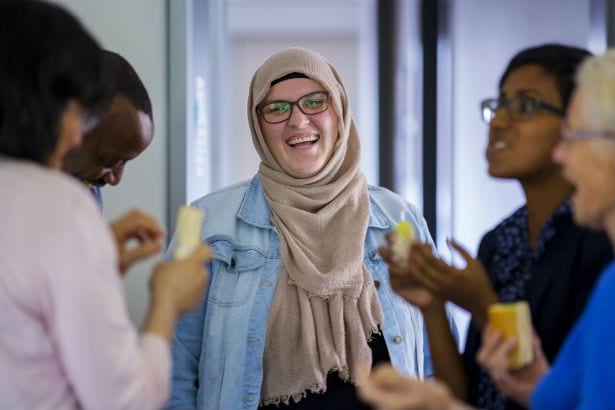 In Shepparton, one in five people are born overseas. Among residents from Italian, Greek, Albanian, Turkish, Lebanese, Macedonian and Chinese backgrounds, Betul says the area’s diversity is ever-growing with Iraqi, Afghani, Sudanese, Congolese and Syrian communities. Employment, education and housing are the biggest issues facing these communities, and according to Betul, discrimination remains the key barrier to renting a house and securing a job.

“Housing is massive. Ethnic families are big families, and most home owners, when they hear of a certain name type – a name that suggests that it’s not Anglo or mainstream – and you’ve got five kids on the list there, it’s usually a no-go.”

“Lots of discrimination in employment as well. We had a girl that wore a headscarf, she was born and raised in Australia, she’s a hairdresser. And she was applying at every single beauty salon in Shepparton – didn’t get anything, she was applying for over a year. She took her scarf off in the end, and the first salon that she went into she got a job…there’s lots of examples like this,” Betul explained.

As a project officer at the Ethnic Communities Council of Shepparton over the last three years, Betul has followed her passion of making a difference in child protection and working with women and youth affected by Female Genital Mutilation (FGM) and Early Forced Marriage (EFM).

Although there are difficulties in accessing consistent data about FGM in Victoria, Betul says the number of women who are presenting locally with the condition is high and the most extreme type of FGM – Type III – is common.

”We’re guessing that we’re looking at the 600 mark in the Shepparton region.”

“It’s less common around the world, at a global scale, but locally for us, it seems that it’s the majority for our mothers that are giving birth.”

On Early Forced Marriage, Betul says the system is to blame.

“I criticise the system itself more than what’s happening with the families. The system has to recognise this as child abuse and not as a cultural practice and not as marriage. Just the fact that we call this child marriage is disturbing, because we don’t recognise the marriage of children, so why would we call it child marriage?”

When she isn’t busy at work, Betul finds time to volunteer for Picnic for Peace a monthly meet up in Shepparton that invites people from all backgrounds and walks of life to connect over food and family.

“You’ve got mainstream Anglo-Australians, you’ve got members of the LGBTI community, you’ve got new arrivals - and not just people from refugee backgrounds, they might be students or on working visas…all different ethnicities, religions…and all different ages – you’ve got people who are retired and three-year-olds,” said Betul.

“And it’s very simple, we chuck a mat on the floor, share food, and spend almost a whole day together with people that we might not’ve met before. And it’s quite popular. People become friends, they use social media to keep in contact, they exchange numbers, they meet each other outside of the group.”

Soon, another new activity will be bringing people together in Shepparton. Betul has been preparing to launch her own caravan for social cohesion, Hijacked, carrying the slogan ‘nourish the conversation’.

The caravan will tour rural and regional towns to positively engage the broader community in conversations about multiculturalism through topics that are relevant to them, while sharing home-cooked Turkish treats and the stories behind them.

Along the way, the project tackles intergenerational issues among the Turkish community by joining up older women to cook their best meals and young people to serve them to the conversation crowds. Far from excluding anyone, the project has also sought approval and support from Shepparton’s traditional owners and it’s first community conversation will discuss our First Nations.

Betul said that despite some opposition, community assistance and support has flowed in to help build the project and the caravan.

“The community response has been amazing… overwhelming. So far there’s been more support - and this ‘wow factor’ - than negativity. But there was [in the beginning] a lot of negative feedback from the broader community, and these are people that not all of them have something to do with Shepparton. But the support was a lot more. People send us messages now on social media saying ‘is there anything I can help out with?’” she said.